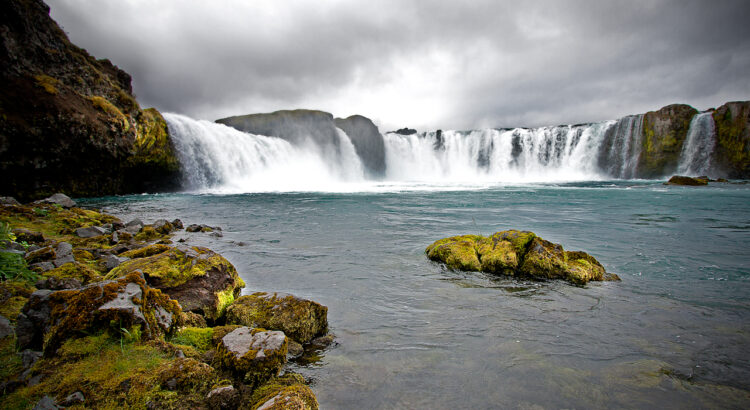 The waterfall of the gods is at the outermost western corner of the Diamond Circle, at its boundaries, but Goðafoss’ gorgeousness makes of this place the umpteenth wonderful spot to discover in your trip along this region. Moreover the waterfall is connected with one of the most important events in Icelandic history: the conversion to Christianity in 1000.

In that year the Lawspeaker of the Icelandic Parliament was Þorgeir Þorkelsson, who lived only few kilometers away from the waterfall. He was a pagan priest and the main matter in his days was whether Icelanders should keep practicing Norse Paganism or convert to Christianity. After a day and a night of deep meditation under a fur blanket (yes, at the time Iceland was a quite cold place like it is nowadays) he decided in favor of Christianity and he became a Christian himself. Pagans, anyway, could still practice their religion in private. To symbolically make official the decision, Þorgeir headed to Goðafoss bringing with him the heathen idols. Here he reached a cliff, raised the idols and threw them into the falling waters.

Approaching this elegant waterfall you’ll understand why Þorgeir chose this location to seal a historic moment for Iceland. Standing on the edge of a vertical cliff you will feel how his dramatic act was matching the likewise dramatic stage. The semicircular shape of the waterfall, its bright blue and green colour under a sunny sky or its severe deep shades under in an overcast day, the dull and gentle rumble of the waters, all that gives life to an enchanting and striking scenery at the same time.

Goðafoss can be seen from two sides and we highly recommend to try both, given the very short distance between each other. The right side offers a better overall and frontal view while the left side allows a lateral view and from here it’s possible to reach a tiny rocky beach at the level of the river below the waterfall, which gives a different perspective on the waterfall. Just be really careful is you climb down as the path is steep and slippery. And, most of all, never throw anything in Goðafoss. It’s not that the waterfall is named after each object is thrown into.

How to get to Goðafoss Waterfall?

If you’re coming from Húsavík drive road n.85 for 45km, direction South. At the junction with road n.1 turn left and after 5km you reach Goðafoss.

If you’re crossing the island from the south through Sprengisandur you need to reach road n.1. From the junction Goðafoss it’s only 500mt to the left.